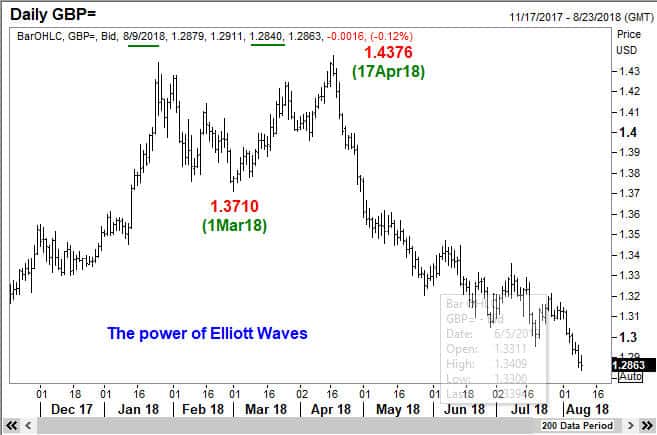 Elliott Waves are incredibly useful while trading the financial markets. In today’s post, I am going to show you how Elliott waves enabled us to anticipate multiple turning points in GBPUSD, one of the most traded currency pairs in the FX or Forex markets. It is now 20 minutes past 9 am in Chicago, (where I have come for a few weeks), and when I opened my Reuters screen, the first headlines I read was Hedge Fund Boss Odey says the Sterling Pound GBPUSD could continue to fall further before Brexit. And then I thought to myself, well, the members of WaveTimes knew the Pound was going to fall, back in February. In the first image below I give you a screenshot of that story and then continue to give you a link to the Elliott Waves analysis that I had sent to a members who asked for consulting on GBPUSD back in February 2018. You can then see how Elliott Waves give us an credible edge in trading, whether it be in FX markets such as the GBPUSD or any other liquid instrument such as stocks and commodities.

So you can see the power of Elliott Waves in action. You will see from the analysis presented below that I have used exactly the same techniques that is taught in the Elliott Wave book “Five Waves to Financial Freedom“. This blog is considered by many as a living book, an extension of what is taught in FWTFF.

The secret to success is having an edge, and knowing how to USE that edge. You can learn these techniques yourself! But if you are busy, you can always approach me for consultation as a member of the exclusive club.

Here is the link: How Elliott Waves anticipated several turning points in GBPUSD

Trading GBPUSD in the short term