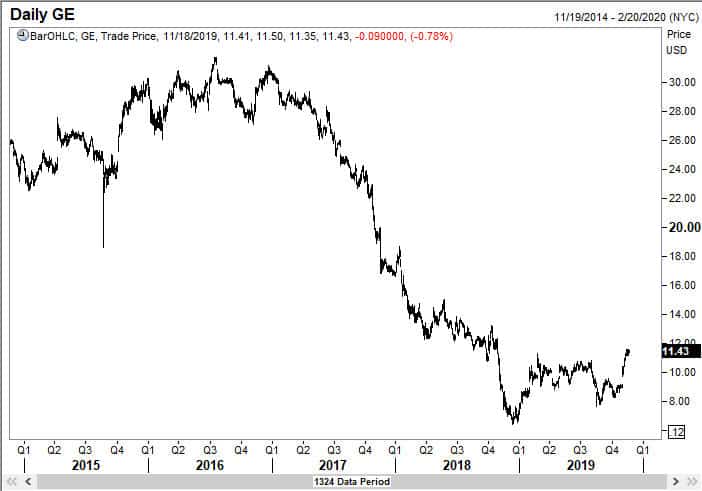 As explained in my Elliott Wave book, Five Waves to Financial Freedom, we should begin our analysis with the bigger picture. A standard approach that I follow is to use the daily chart as far as possible. You might be trading the short term, but the clues that the daily chart gives us is far more valuable.

What clues does the following daily chart of General Electric give us? Take a look and see if you can figure it out yourself before reading on.

Like most charts, this one too is open to many different interpretations. Do you see five waves down from the top? Great! I can bet there are many who can see just three waves down. The truth is, no one knows for sure how many waves there are. This is what I am teaching you in my on-line program in great detail.

Anyway,  let us look at the next chart of General Electric where I have drawn a Fibonacci grid.

You will observe that the 23.6% retracement , which also happens to be a prior low, comes at $12.24. We should expect a short term resistance there. Next, let us try and figure out where to buy this stock. To do this, we shall look closely at the moves from the significant low of $6.40. We are in the third step higher, and you can see that how I have labeled the chart. The third step higher can thus be a wave 3 or a wave C. It doesn’t matter to the short term trader of General Electric. Either wave should be made up of 5 sub waves.

Obviously we don’t know yet where sub wave 3 will end. But this is where you have to watch the market. Suppose we have already seen the top of sub wave 3. Then the following chart shows how I will approach the trade.

Although it will be a much better deal if I buy at the 38.2% retracement, I get my clues from the speed of the rally. Maybe if I wait for the sweetest spot to buy, I could get left behind! So I will stagger my buying over two levels, at 10.85 and 10.35, giving me an average of 10.60. You can’t do this blindly, and some judgement has to be made. By the way, if wave 3 ends higher than where I have assumed in the above example, you will recompute the buy levels.

Where will I take profits in my General Electric trade? In the example below, I have assumed that sub wave 4 will finish exactly at the 38.2% level of 10.30. In that case, the target for sub wave 5 will be as shown. But I will be more than happy to take a 10% profit on this trade and exit a few cents ahead of the first target.

Like a majority of examples in this free blog, this is a real-time example, and you can see how things will turn out. Of course, I will have stops on the trade. Trading tactics are all explained in detail in my online course. But a basic introduction is available in FWTFF.  I hope this example of trading General Electric Company helps you become a better trader. Good luck.