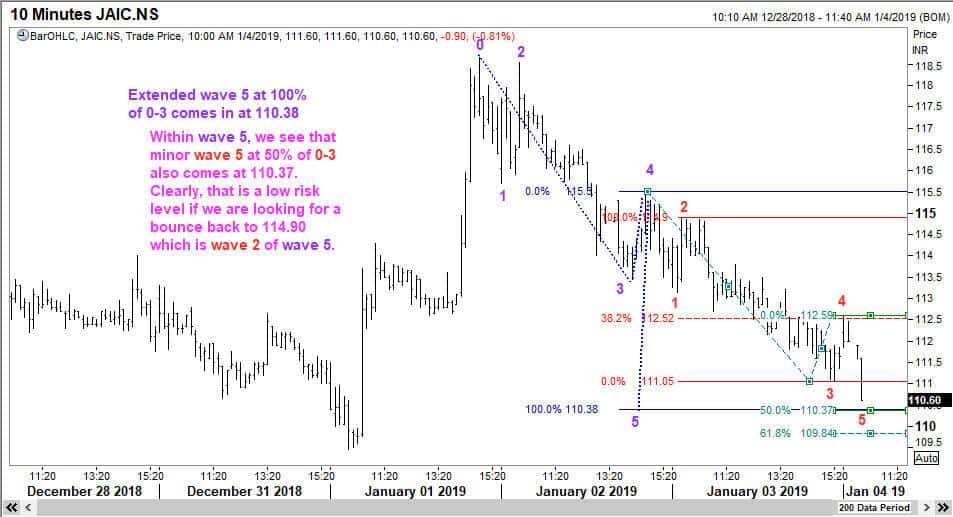 With Elliott Waves, there are numerous places in the development of a cycle that can be profitably exploited. This post shows you a most recent example, from just one trading day earlier. The wonderful opportunities following an extended fifth wave is illustrated, so that you can learn which battles you should be involved in. A majority of traders lose in the markets because they randomly buy or sell. That is not the approach which I recommend. In my book, as well as in my seminars, I teach how to be patient until a low-risk opportunity presents itself.

Generally speaking, I don’t recommend you go any lower than an hourly chart for the purpose of trading, unless you feel you have sufficient experience using Elliott Waves. The daily charts are best because a lot of noise is eliminated. However, for the purpose of illustrating how to exploit an extended fifth wave, (as well as to make some money in the process!) I have chosen a 10-minute chart.

When you look at any chart, pay attention to the waves. We know that very often, one of the three impulse waves will extend. And if you are lucky enough to spot a chart where the fifth wave is experiencing an extension, then you can rub your hands in glee, because not only will we get a snap back to the minor wave 2 inside the extended fifth wave, but also the move will be relatively quick.

In the above chart, you can see the 5 waves quite clearly, and you are also able to see 5 tiny waves inside the third wave, even though I have not marked it out so that we don’t make the chart too busy.

More importantly, I have shown that at 100% of 0-3 (the violet labels), the target for extended wave 5 will be 110.38. Simultaneously, I have also shown the target for wave 5 (red color) inside the larger fifth wave has two targets, one at 50% that falls almost at the same level of the prior target (110.35) and another, at 61.8% of 0-iii at 109.84.  This analysis was done around 10 a.m. on January 4, 2019. Having done the analysis, what is the next step?  (a) You can sit back and see what happens (b) You can take action and get some exposure to the market. After all, the whole point of the analysis is to determine where to enter the trade. So this is what I did.

I can place my buy order at 110.40 (2 paise above the target) and miss the entire trade, or I could be a tiny little more aggressive, and place a bid at 110.50. So I did the sensible thing and placed a buy order at 110.50. As always, when we choose to be aggressive, the price will reach the target and beyond 🙂 but we should be prepared for that. The only way to defend yourself is to trade a position size that lets you ride out such a turn of events.

Once my buy order was done, I could do several things, but mainly, I could sit glued to my screen and sweat at every price update, or I could place my profit order and do something else. This is what I did.

I placed my take-profit order at 114.75, a few paise ahead of the 114.90 target. I made the order valid till next Friday, shut down my laptop, and continued with other things. But just before I switched off, I saw that the price had reached 109.80, which would have been a perfect level to buy as that was the 2nd target I had anticipated. But that is life!

And today, when I opened my Laptop and checked the price, lo-and-behold, the profit order was executed. Could the price go higher? Of course, it could. Why did I choose to sell at 114.75 and not wait? I had a plan, and I just executed that plan. Every day hundred of stocks go up and down by much more than what I made on this stock. Can I be worried about missing the action in all of them? The secret is to take the low-hanging fruits and enjoy life.