Should we buy PI Industries Ltd now? Another look! 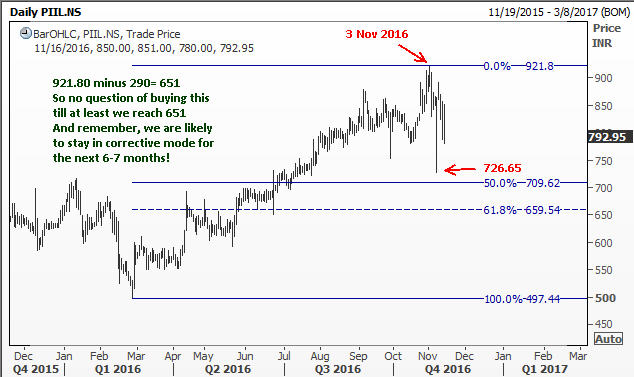 Back on 2 October 2016, PI Industries Ltd was trading around the Rs.831 level.  The outlook was still positive, and some big-name players were increasing their stakes in this company. However, coat-tailing blindly as many people are wont to do may not be the smartest move. Elliott Wave analysis of PI Industries suggested a possible target of 941, (which was just about Rs 100 away) but a potential for a correction of about Rs 290. So I had recommended that we should be patient till we get that dip at a minimum. Let us see what has been happening to the stock in the last 6 weeks.

The news about the demonetization came out on 9 November,  and the US Presidential election results was out on 8 November. But PI Industries posted its top on 3 November. We have already been down to 727, which is about Rs 195 down from the top (21% loss) and nearly 13% down from 831 when we first discussed the stock. That is some good money saved, don’t you think? But wait. The correction is NOT over yet. We are not going to jump in just yet, because it should go down by at least Rs 290 from the top, meaning we will see 631 levels in the next 6 months or so. Thus, as a savvy investor, you will choose to focus your attention on some other stock, while keeping a quite watch on PI Industries. I will thank you if one of you could remind me as we approach the said target!