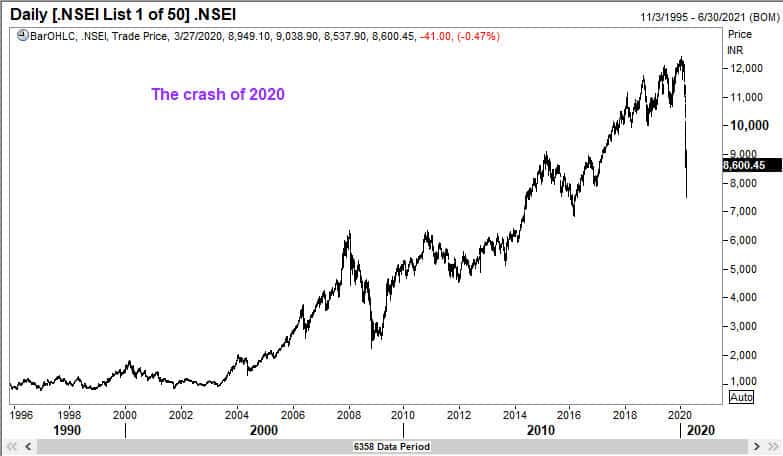 Stock markets around the world have crashed. But Elliott Waves had warned of a deep correction several days before it actually happened. This post will show you how Elliott Waves helped members of my exclusive club to exit their positions before the crash. Remember, this free blog is a learning resource for you, and this post is only sharing a few charts to aid you. I have a consulting service, and members who asked for SnP500 or the Nifty or Gold or Oil had benefited.

In this post, we will look at India’s Nifty. As explained in my online program, I start with a long-term chart to get a feel of where we are in the big picture. My members know that I spend more time on the weekly and daily charts to determine my trades. Beginning traders spend a lot of time analyzing the short term charts such as 5 or 10-minute charts, and generally that is a complete waste of time.

Here, for example, I started with the monthly chart of India’s Nifty index.

So you see that I was establishing that a major wave III was nearing completion, perhaps around 12716.

I will save you from all the other charts that went in-between, but present you with the final chart where I have drawn conclusions. You will see the date of the analysis as 10 January 2020, and the Nifty Index was trading at 12,256 (the last price seen on the Y axis to the right, in bold black color). I had already discussed that we were in an ending diagonal for the major wave III, and that sub wave V should be made up of 3 waves, a,b,and c and that we were in wave c. This wave c should have 5 mini waves (red color in the chart) and we were in the final wave v. The possible targets were 12531 and 12672. It actually finished at 12430 ten days later, on 20 Jan 2020.  The trader who waits for the last tic to sell is often disappointed. But in this analysis, I had also said that once we trade below 11694 at ANYTIME from that moment onward,  we should assume the top is in place and therefore start selling on pull backs.  Here is the chart. 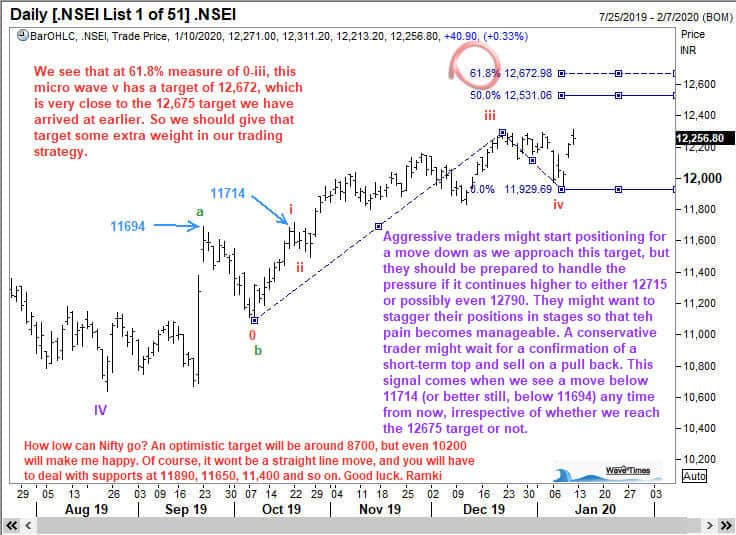 If you read the comments in the bottom of the chart, in red color, I have said that an optimistic target for the correction will be 8700. Little did I know that a global pandemic would be upon us in a matter of days. The Nifty index reached 8700 on 13 March, 2 months after I sent these charts to my members. Even at 8700, that is 30% down from the top. Of course, we have been lower still, to 7510 since then, which is 40% down. The point is, Elliott Waves did warn us of an imminent top, and you too could have spotted it had you employed the knowledge you gained from my book Five Waves to Financial Freedom and this free online blog. Of course, my online Elliott Wave program spends a lot of time teaching you how to use the theory, which makes all the difference to your bottom line. Learning the theory is not difficult, especially if you have read FWTFF. But you should also know how to apply that knowledge.

A key point to note is this. My above analysis has served its purpose in anticipating the fall. But the wave counts that I have used there needs to be revisited. Indeed, no wave count is cast in stone. And this something that you should always bear in mind.

Nifty rallied up in 5 waves