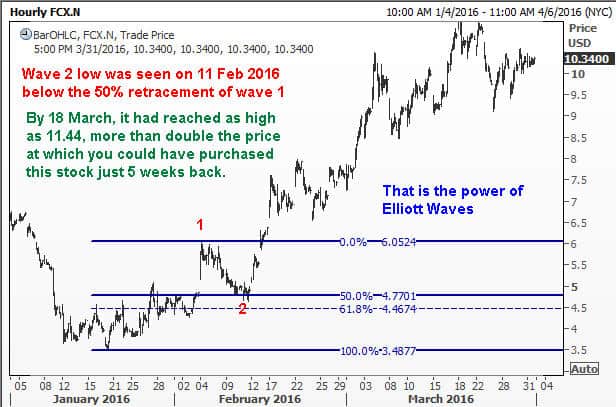 Readers of the Elliott Wave Analyses on this blog would remember that on 8th February it was suggested that investors in Freeport-McMoran Inc. might consider buying on a dip between 50% and 61.8% of the rally from the $3.52 low. That low came on 11 Feb at $4.65 (over 18% below the $5.72 when we had discussed this stock). Wonder of wonders, the market decided that the correction below the 50% level was adequate for wave 2, and we saw a magnificent wave 3 unfold.

As you all know, Elliott Wave Principle says that the third wave is the most power of the three impulses. And the upward cycle will be made up of 5 waves. Those who took the risk and the signal have seen their money double is just about a month. Now isn’t that a great example of Elliott Waves at work!

Here is the Elliott Wave chart of Freeport-McMoran Inc (FCX) as it appears today.