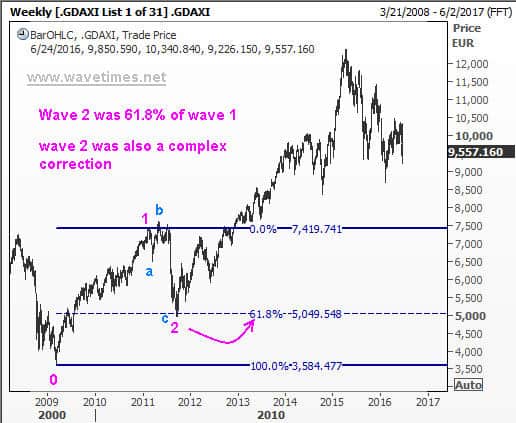 Elliott Wave analysis of the German DAX (DE30) index would have guided us well ahead of time about the deep correction that is underway in the European stock markets. This post discusses how we could have used Elliott Wave analysis to anticipate key turning points in the benchmark index, and taken steps to lighten our equity exposures. The steps I use have all been explained in detail in the Elliott Wave book “Five Waves to Financial Freedom”. Let us start by looking at the various waves since the significant low of 3588 on 13 March 2009.
Wave 1
The first wave, or what we label as wave 1, went from the low of 3588 to a high of 7442. If you look at the intra-day charts of the German Dax during this period, you will be able to see that this wave 1 had its own set of five sub waves. You will also notice that sub wave 3 within this wave 1 was extended, in that it traveled more than 161.8% of sub wave 1. Thus, I would have determined that wave 1 was extended, giving a low probability for either of the upcoming impulse waves to extend. However, the more interesting development happened subsequently. But first, let us look at the chart.

Wave 2
Wave 2 was a complex correction. It has traced what is described in the Elliott Wave book “Five Waves to Financial Freedom” as an irregular correction. Notice that sub wave b posted a high that went above the end of wave 1. We then got a deep sell off as wave c to compete a three-step complex correction. The fact that wave 2 was deep is important at that time because it signaled to us that wave 4 will likely be short and simple.

Wave 3
Next we look at the third wave, or wave 3. Observe that it reached slightly higher than the 123.6% Fibonacci ratio projection of wave 1.

Wave 4
As anticipated earlier on, wave 4 was a brief and short correction. It was also a normal zigzag correction. Traders and investors would have added to their holdings on this dip. When I advise my high-net-worth clients and fund managers, I recommend them to add more to their core holdings during this fourth wave dip.

Wave 5
And finally, Wave 5 finished exactly at the 61.8% measure of the distance traveled from point 0 to point 3. This is quite an amazing phenomenon, and has been described in detail in my book. Now you tell me, which other approach to the financial markets can be more accurate than this in anticipating the end of a bull cycle!

Conclusion:
I agree that it is not easy for traders and investors to be able to label waves with confidence, which is why many high networth individuals and hedge fund managers seek the advice of professionals. But, you too can improve your performance in the stock market by paying simple attention to some relatively straight forward rules and guidelines. I wish you all the best. Ramki