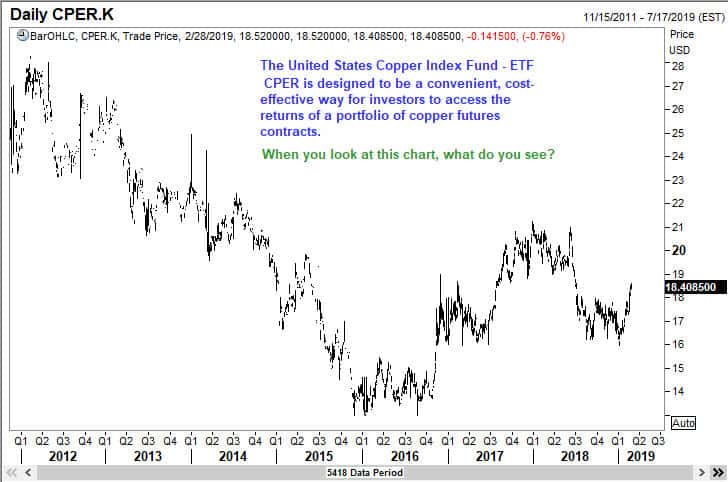 Elliott Wave analysis is a great tool to help you decide an appropriate levels to gain exposure to any asset class. CPER – ETF – or the United States Copper Index Fund has recently been in the news. Yahoo Finance has run this article that says ‘industrial metals-related exchange traded products are strengthening this year as tightening inventory levels and rising optimism for a return to global growth following a U.S.-China trade deal are supporting the fundamental outlook.” Specifically, CPER has gained 12% this year-to-date! So let us see how we can use Elliott Wave analysis to gain an edge if you are considering an exposure to this ETF.

The first step to trading smart.

When you look at any chart, you should look for clues. When you see the chart of CPER below, what do you make out?

At a very basic, novice level, you would not be buying as the wave 5 is approaching its target. Rather, if you had been long at any lower level, you will start to downsize those positions as wave 5 is progressing higher.

Once you have tentatively decided were to place the labels, you use Fibinacci tools to see if they confirm your assessment. In the above chart, we see that wave 3 finished at the 223.6% projection of wave 1.

Once the sharp third wave up in CPER ran out of steam, we saw the commencement of a sideways correction, which we know as wave 4. The Fibonacci tool should have helped us anticipate where wave 4 could end, and sure enough, we saw that happen at the 50% retracement of wave 3.

My book on Elliott Waves , Five Waves to Financial Freedom, explains how we can anticipate the possible end of wave 5. In this case, we see that wave 5 was related to wave 1 by a Fibonacci number. We also know that once a 5-wave move ends, there will be a correction of the entire bull cycle. Therein lies a great advantage to the user of Elliott Wave analysis. He or she will start getting out of any long positions as we approach the end of wave 5, or as soon as it becomes clear we have completed the bull cycle.

We see here that the three wave correction that came after the end of the 5-wave bull cycle also can be analyzed using the Fibonacci relationship between the waves. Wave c was 223.6% of wave 1. But the more important clue is seen in the next chart.

One of the most important ratios that we use in Elliott Wave analysis is the 61.8% retracement level. As a matter of fact, a patient trader needs to do nothing more than wait for such a move to happen and buy there. No other complex analysis is needed to make money. Just a simple watch over several stocks or commodities and entering near the 61,8% retracement is a model that will yield handsome profits! In this case, where the Wave C corresponded with the 61.8% retracement is a much more powerful signal. Sure enough, CPER has rallied sharply from there.

Knowing where to enter is of great importance to a trader. Clearly, buying CPER right here is not recommended by Elliott Waves because that won’t be a low-risk trade. My approach is to be smart about this business. Take those trades where the odds favor you. Near the 50% retracement level is not such a level.

We now have to make an assessment of where we are in the progression. As you can see from the comments in the chart above, we are probably in the late stages of wave 3. So the right approach will be to wait for wave 4 and then buy that dip.

You will see that a deft use of the Fibonacci tool gives you an added level of comfort. So the earliest level to try a long trade will be near the 18.10 level.

You can also make an assessment of how high CPER can go. This will allow you to decide the risk-reward trade off and the position size. You can see that Elliott Wave analysis of CPER suggests an optimistic target of 19.10, which is more than 5% up from our panned entry level.

At WaveTimes, you see numerous examples of how we can use Elliott Waves to take low-risk bets in the market. Good luck in your pursuit of Financial Freedom.

copper CPER ETF
Share. Facebook Twitter Pinterest LinkedIn Tumblr Telegram Email
Previous ArticleHow to effectively use the power of Elliott Waves in your trading?
Next Article The Elliott Wave Course – How to Profit from Elliott Waves