BHP ready to dive or roar?

BHP Billiton is an Anglo-Australian multinational mining, metals and petroleum company headquartered in Melbourne, Australia. It is the world’s largest mining company measured by 2015 market values and Australia’s fourth largest company (by revenue), formerly the largest.

Yesterday, my good friend Bob sent a chart suggesting that maybe BHP is ready to decline after posting what looks like a wave 4 top. I am taking the liberty of posting that chart here because it will help many readers to think through situations such as this. 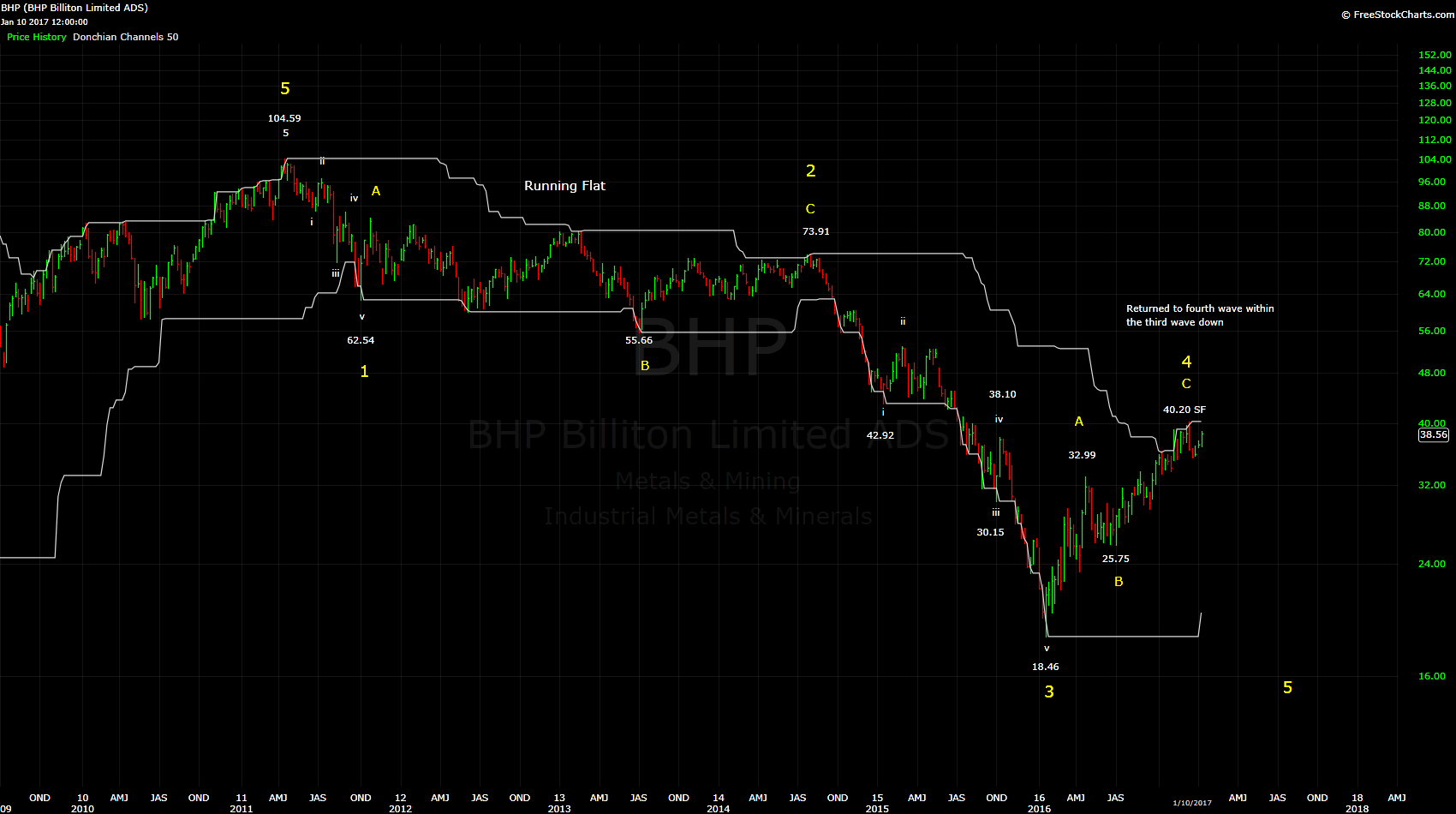 When Bob sends me something, I look at it carefully. He is a very experienced operator.

I want you all to remember one important point. There is no wave count that is cast in stone. We should use waves to help us trade. It doesn’t matter if the wave count is wrong! With that preamble, let us take a look at the charts below to see how one could view the waves that BHP traced with a different pair of eyes. 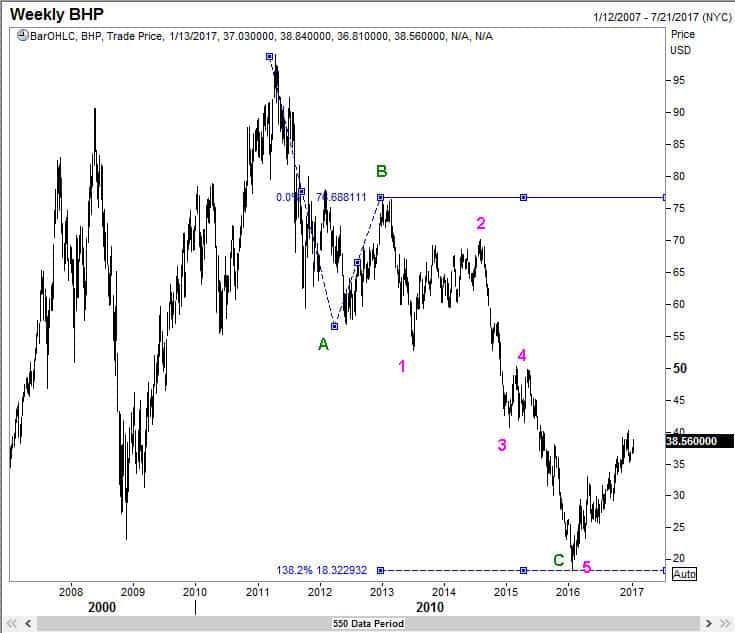 When one looks at the pink colored wave 4 inside the wave C, it will definitely appear to be a rather small pause in the middle of what could well be an extended wave 3.  So why did I call that wave 4? First, the fact that 18.32 appears to be a nice 138.2% projection target for wave C is very tempting to ignore. Second, the rally from the lows has already gone past a mini reflex point inside wave 5. Also, as wave 2 was deep, it is not normal for wave 4 to also travel so high. So I prefer to consider this rally as a new up trend (at least I get some clues to make me reconsider that view – this is discussed below).

Again, some might wonder if this is correct when there are so many overlaps. Take a look at sub wave 1. It has 5 minor waves. Maybe this is an expanding diagonal! Also, wave 2 came off pat to the 50% retracement level of wave 1. All very pretty (and convenient!). 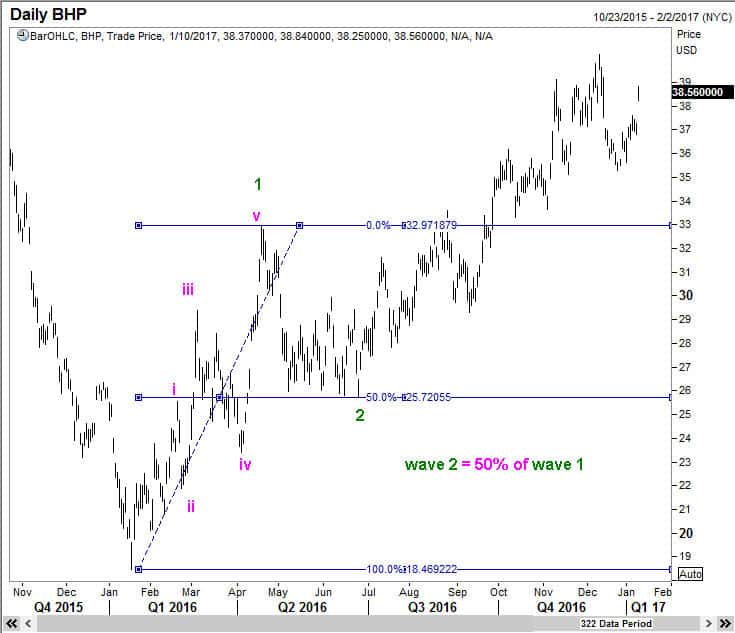 The chart shown below needs no further comment, other than to recognize that maybe wave 3 of BHP has more room to go on the upside. Yet, for the moment we will let things as they are. 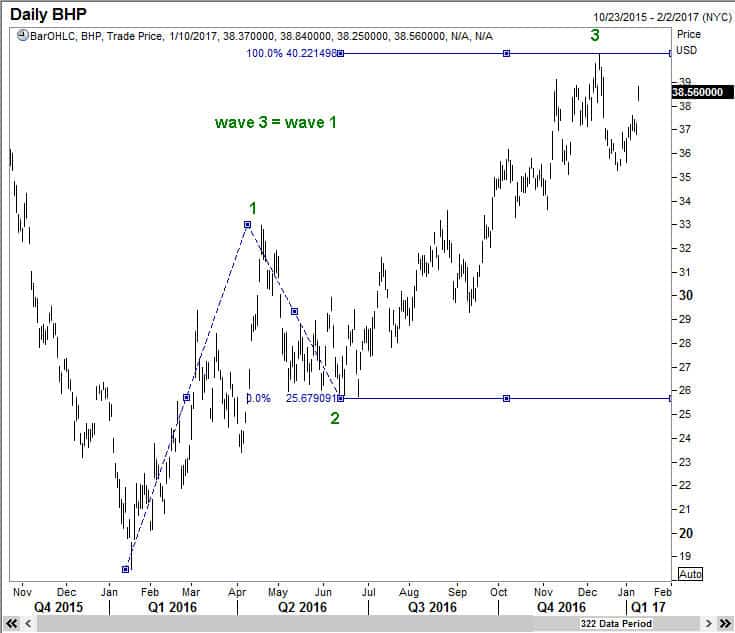 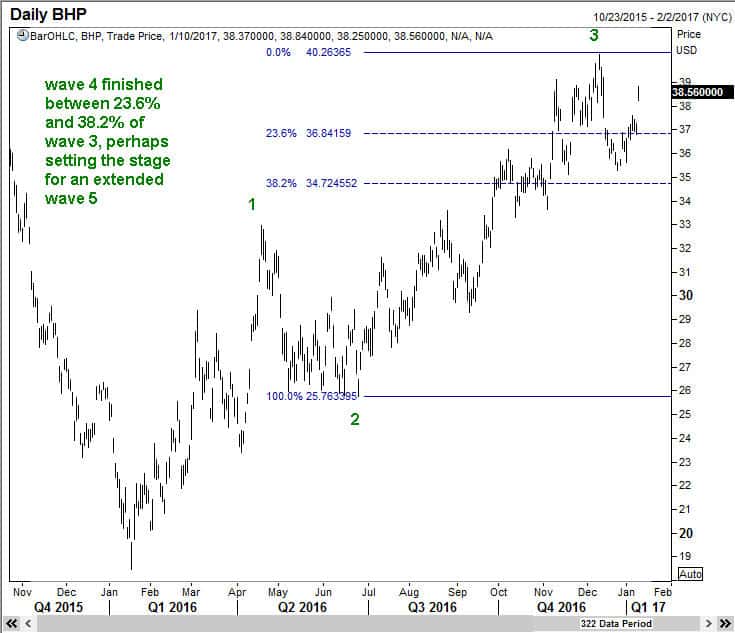 BHP- justifying my paradigm.  ( I always tell people that I could be wrong. So hear me again. I could be wrong…) Here are the 3 waves inside wave 4 where wave c is 223.6% of wave b. When you get some dexterity with waves, you could always justify your position. Just kidding. 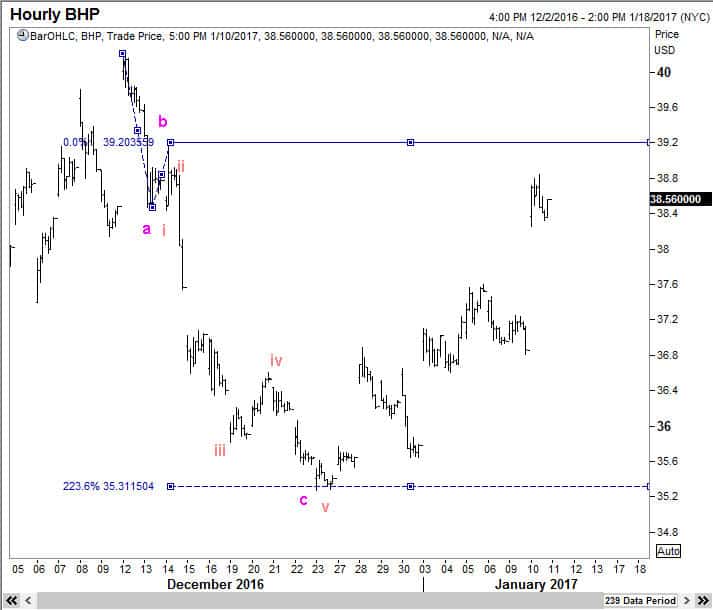 BHP on its way up, possibly as an extending wave 5

When wave 4 is abbreviated, and waves 1 and 3 are of normal measures, then there is a increased possibility that wave 5 could be an extension. You would have read that in my Elliott Wave Book Five Waves to Financial Freedom. But even as a conservative trader (investor), we can say that wave 5 will likely test 48.67 as shown below. 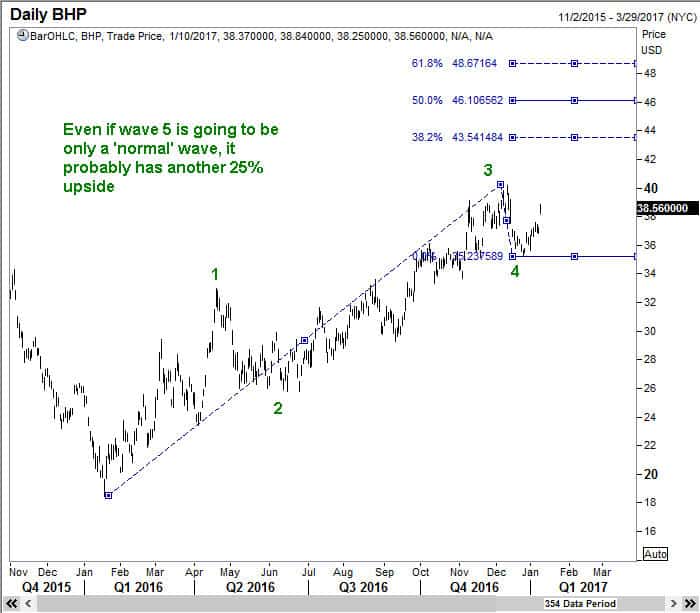 BHP – when will I start thinking ” Bob was right, again!” 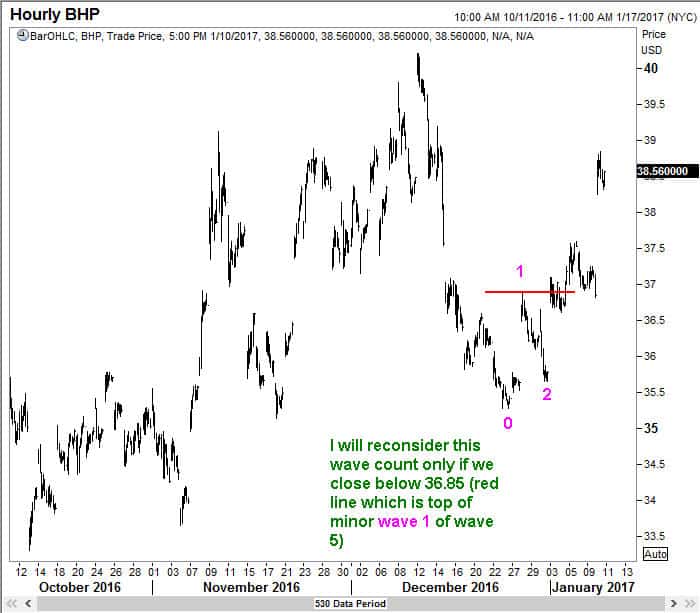 I hope you enjoyed this learning experience. After all, WaveTimes.com is the ‘living book’,  the running extension of FWTFF. One of the reviewers of that book said I haven’t shown examples of where my wave counts failed. Well, this example has the potential to fail 😉  just kidding.

By the way, please read the statutory notice below, something that I am required to post these days, now that I am registered with SEBI, which is the Indian equivalent of our SEC.

Statutory Declaration:
I am a SEBI registered Investment Advisor and a SEBI registered Research Analyst.
As you have not discussed your individual financial situation with me, you should not consider this Investment Idea as a recommendation to buy the stock. Rather it is meant to guide you how to ‘think’ about such investments. I also do not own any stock in this company and do not hold any office that will award me a compensation from that company.

BHP Billiton Elliott Wave Analysis of BHP
Share. Facebook Twitter Pinterest LinkedIn Tumblr Telegram Email
Previous ArticleRandgold Trade closed with a gain of 12%-22%
Next Article Exclusive offer to members: Analysis of a US stock that can nearly triple in value in the medium term